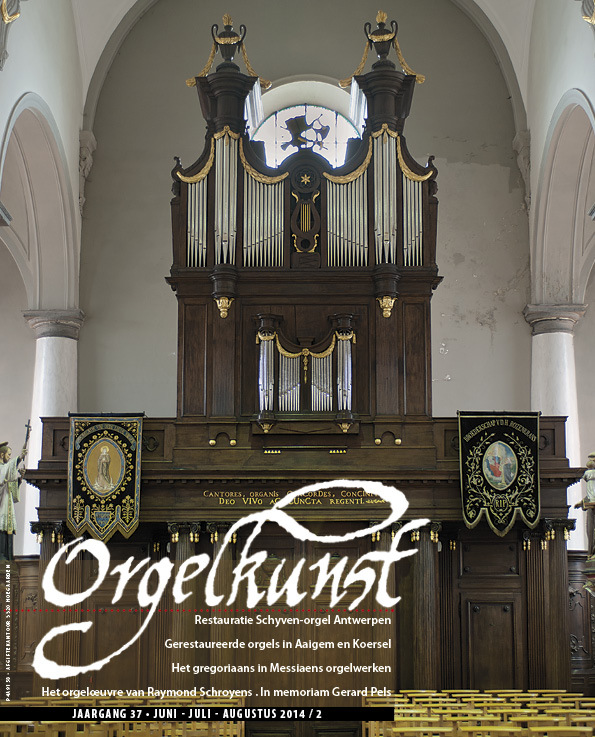 Luk Bastiaens: The restoration of the Schyven organ (1891) in the cathedral of Antwerp under way

The four-manual symphonic organ with 90 stops from 1891 that is located in the cathedral of Antwerp, is the largest historical organ in Flanders. It is the masterpiece of the Brussels organ builder Pierre Schyven (1827-1916) that has been handed down to us almost intact. Unlike many romantic organs, this instrument was saved from any Neobaroque interventions during the twentieth century. Although there was a general tendency at the time to carry out many organ building experiments, the Schyven organ was built in a traditional way with mechanical traction and slider chests. An important novelty in 19th-century organ building, the Barker machine was also adopted in the Antwerp organ. After more than 120 years the organ is in need of a general restoration, due to overall pollution, collapse of pipework and wear of penholders.

The importance of Gregorian Plainchant for Olivier Messiaen is evidenced both in his writings (i.e., Technique de mon langage musical and Traité de rythme, de couleur, et d’ornithologie, Vol. IV) and by numerous quotations and paraphrases of chant throughout his oeuvre. Surprisingly enough, the existing articles that discuss chant in connection with Messiaen limit themselves either to the technical aspects of how Messiaen integrated direct chant quotations in his musical language, a theological discussion of the link between the text of a specific chant quotation and/or the general theme of a composition. This article provides evidence that chant was not just a source of melodic or textual inspiration for Messiaen, but provided a much larger technical and philosophical background to his output. The first part is an analysis of the influence and importance of chant for Messiaen from three different angles:

-The general importance of chant (i.e., the century-old musical heritage of the Roman Catholic Church) for Messiaen;
-The technical aspects of chant as described in the Traité;
-The integration of chant quotations into his compositions.
Based on the results of this analysis, the second part explores how chant has informed Messiaen’s musical language in ways that go beyond direct quotations and/or textual references. If the compositional features identified as being usually employed in chant quotations (such as texture, registrations, note values and tempo indications) can be found in sections that do not contain a chant quotation, the question arises to what extent this is a mere coincidence or conscious planning by the composer. Three examples from Messiaen’s major organ cycles strongly indicate that the inclusion of these ‘chant-inspired’ elements was probably carefully crafted in at least some instances. The study of these examples reveals how the inclusion of these features allowed Messiaen to
-Express abstract concepts such as the Trinity
-Create a dreamlike – almost eternal – atmosphere
-Include joyful dances in his music.
The article concludes with additional examples that indicate that Messiaen used chant quotations and compositional techniques derived from chant in order to express his Catholic faith on a grander scale.