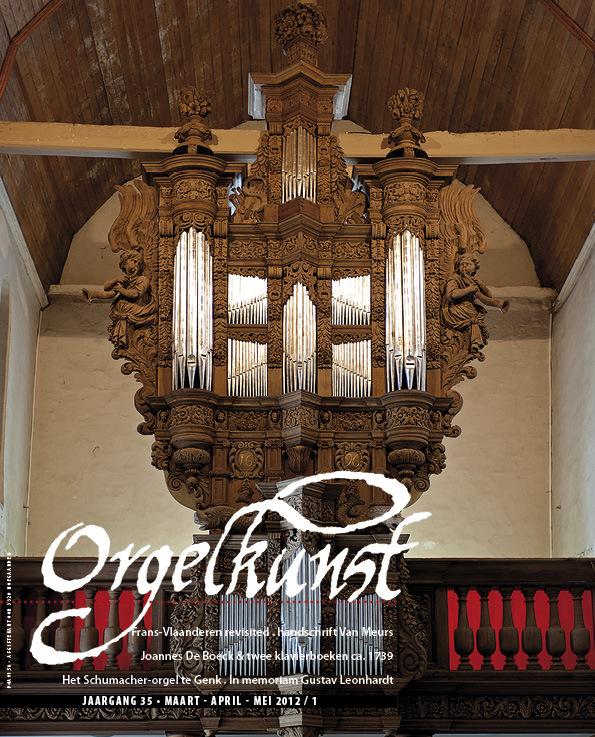 This contribution directs attention on a source of keyboard music from the Southern Netherlands, unknown up until now. The extensive manuscript, bearing the inscription 'Johannes Baptista Van Meurs Anno 1747' was found in a private collection. The relatively large size and thorough compilation of this manuscript forms a intriguing picture of what the 1747 anthologist regarded as keyboard music. We discuss an overall view of the content, identifying and presenting concordant versions of the (mostly anonymous) compositions; as such, we were able to rediscover several works, including an unknown composition by Josse Boutmy.Along with ‘authentic’ harpsichord music (François Couperin, Jean-Baptiste Loeillet, and local Dutch contributions from composers like Ignatius De Boeck and Petrus Paepen), the manuscript adds different ‘transcriptions’ of overtures, concerti, opera arias, and chamber music. Concerti by Händel are placed alongside violin sonatas by Jean-Baptiste Senaillé, flute sonatas by Johann Christian Schikhard alongside overtures by Johann Adolf Hasse.Challenging our modern-day perspective regarding keyboard repertoire, this source brings us to different questions as well as suggestions on the possibilities of exploring in-depth and refining the keyboard repertoire, a repertoire that until now has been too strictly defined.

Around 1735, the Amsterdam music publisher Witvogel engraved two harpsichord books by the composer and Franciscan recollect monk F.I. De Boeck. Until now this composer has been a great unknown in music history. In 1939, a Dutch monk wondered if he could be identified as Pater Joannes De Boeck (Zemst, 1697 -Brussels, 1775). The latter entered the convent of Boetendaal (Brussels) in 1717; was ordained priest in Antwerp in 1721 and went as a preacher to Maastricht some time prior to 1738. It is unknown if he was an organist-composer and where he lived in 1721-1738.However, according to the Antwerp archives, a homonym was an organist in the Antwerp recollect convent from 1726 to 1735. Most probably this Antwerp organist was the author of the two harpsichord books published by Witvogel and possibly he was also the same monk identified in 1939. This valuable harpsichord music, op. 1-2 by F(rater) I(oannes) De Boeck, consists of suites/sonates in four movements in the manner of Corelli’s Trio Sonatas and Händels harpsichord Suites.