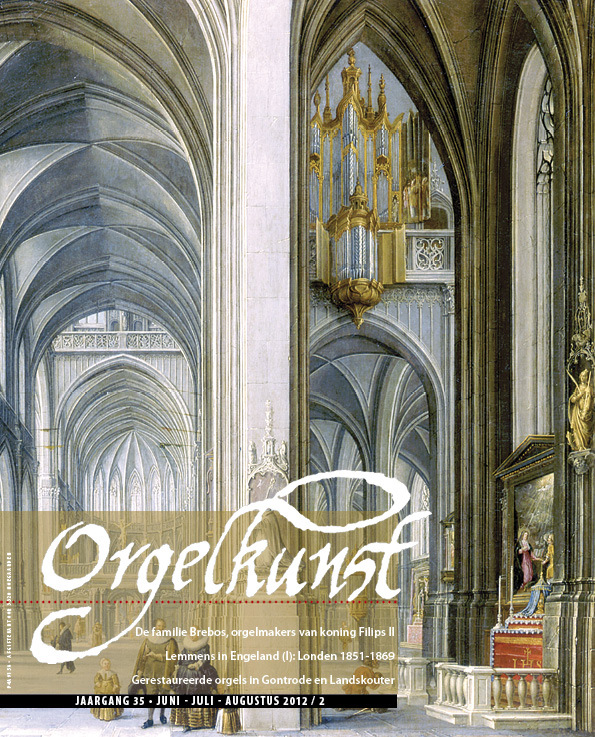 This article discusses the contributions of the Brebos family, who produced a number of important organ builders in the second half of the 16th century, and it will sketch a picture in a chronological overview of the historical background.  Protestantism and the resulting riots in the Lower Countries and repression from Philip II’s reign all had a great impact on the life and work of the Brebos family.
Gieles Brebos was born around 1535 in Lier and established himself as a young, independent organ builder in Antwerp.  From there he received different assignments in the city itself (including such organs as found in the Church of Our Lady and St. George) and in the surrounding areas (Leuven, Mechelen, Hoogstraten, etc.). Shortly after their delivery, during the first Beeldenstorm (period of iconoclasm) of Antwerp in 1566, some Antwerp instruments were already ruined or severely damaged.
The repeated hostilities in and around the city can be the chief cause for Gieles Brebos ultimately seeking his prosperity in Spain.  His son Gaspar had already established himself in 1572 in Madrid and was appointed there to the Royal Chapel as tuner.  Gieles himself moved most likely in 1577, and his other son, Jan, probably followed in 1579.  Gieles’ brother Hans relocated to Copenhagen in 1568 and was fairly quickly named court organ builder there.  He died in 1603.
While still in Antwerp, Gieles was given an order for two positive organs for the Spanish court, and it was thus not illogical, taking also into consideration the position of his son Gaspar, that in 1578 he was also assigned the four organs in the cloister complex El Escorial, where Philip II resided by preference and which had been ordered by him to be built.  Other projects followed, occasionally those of a very prestigious nature.
Gieles Brebos died in 1584.  His sons Gaspar and Jan continued the organ building legacy.  Gaspar died in 1588, Jan in 1609, and another son Nicolaas likely shortly thereafter.
The article also takes a closer look at Brebos’ period in Antwerp.  Not a single organ from this period has been preserved, and we know the disposition of only four instruments.  Moreover, the information found in sources from this time is sometimes ambiguous.  For the Antwerp period we must take into account a documented price quote for the Santa Maria presso San Celso in Milaan.
There is some intact iconographic material preserved from the interior of the Antwerp cathedral from the Brebos period, which should, in principle, aid in drawing conclusions as to the organ facade.  Here, though, caution is required: the paintings are not always wholly true to life.  Nevertheless, the images appear to be largely based upon only two models, both in the late Gothic style with folding doors and central towers: a large organ with a Rückpositiv and a small one without.

Most biographical sources are brief concerning the English portion of Lemmens’ life.  Lemmens appears to have obtained great success ‘in the company of his wife’ beginning in 1869, first as organist, and later also as pianist and harmonium teacher.  But those who examine the English sources directly will see a more varied and concrete picture of this period.
Lemmens’ first introduction to the English music scene occurred during his visit to the Great Exhibition of 1851 in London, where he played the organs in the company of Fétis.  The English soprano Helen Sherrington, whom he married in 1857, led him to different London arenas where he not only accompanied her on the piano and on the harmonium, but also frequently had the opportunity to perform as soloist.  At the end of the 1850s, it was not so easy for a foreign pianist-organist to make a name for himself in London due to negative publicity surrounding non-English music, both in concert life as well as in music education.
The first reviews of Lemmens’ performances as a pianist were not positive.  As an organist he received but few opportunities to showcase his talent.  One particular concert in 1861 was received with great accolades, but this had no lasting impact.It seems that for a time, he lived in the shadow of his wife, a point she also admitted.  Beginning in the 1860s, Lemmens would indeed find more and more success with his exceptional talent on the harmonium.  In London between 1856 and 1869 (as far as is known), Lemmens played a total of 18 concerts on the harmonium, four on the piano, and three on the organ.  For two of these concerts, it is unclear which instrument was played.
In 1864 and 1865 there were two turning points in Lemmens’ life in London: beginning in June of 1864, he (with almost complete certainty) became organist in the Catholic Jesuit Church in Farm Street (until 1874); after 1865 he taught in at least two London music schools.  Thanks in part to the success of his wife, Lemmens’ area of work broadened to include more and more new engagements in London; this would gradually create great pressure on his position as organ professor in Brussels.
A following article will discuss Lemmens’ dismissal as organ professor in Brussels along with an overview of his concert life in the English counties and in Ireland ('in the company of his wife’), his musical endeavors both artistic and commercial, his students in England, and the publications of his works which came about in England.