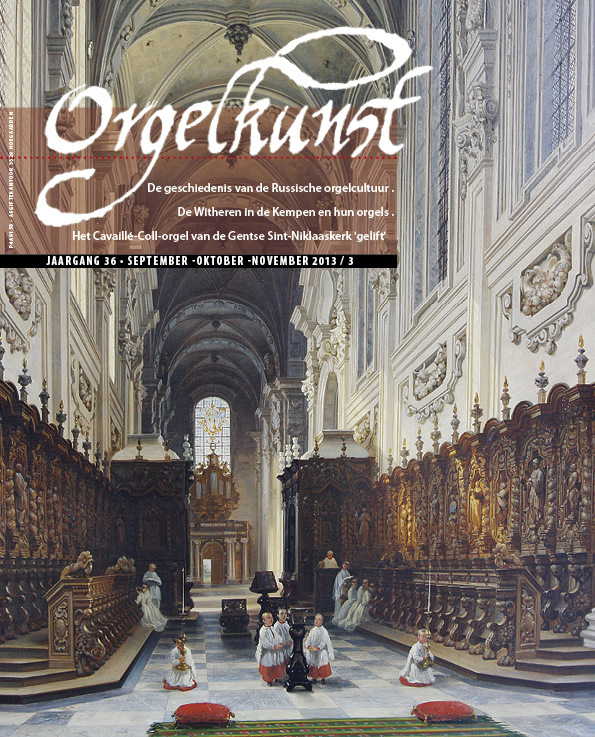 Despite its rich musical tradition, Russia is not considered to be one of the classic 'organ countries', initially because the Orthodox Church forbade the use of instruments during liturgy, and later because all religion was suppressed by the Soviets. As a result, the organ was used originally only for relaxation purposes, then later for concerts with performances being restricted to Moscow and St. Petersburg. The second half of the 20th century began to see change in this respect, and since the opening of the country's borders in 1991, the number of organs and organists have been on the rise. In this article, we attempt to give an overview of the history of the organ in Russia. We consider a number of important organists, organ compositions, organs, and organ schools, along with providing a look at the country's new organs and major trends.

The three Kempisch Norbertine abbeys of Flanders (Averbode, Postel, Tongerlo) have had a significant impact on the economic and cultural development of the region. The abbeys all had organs from the 15th century. Those parishes that were associated with the abbeys were similarly given organs sooner than ordinary village churches.

The Averbode Abbey has an organ by Hipolyte Loret (1861, 4 man/ped), one of the most important examplars of Belgian organs alongside the Schijven organ in the Antwerp cathedral. However, the Loret organ at Averbode has been long out of use. In 1485 Jan Van Gemert built an organ, restored in 1499 following a fire by Jan II van Aren. In 1517 Willem Boets built a new organ which was adapted several times to include new developments: in 1530 and 1540 by Anthonis Toers. Repairs were made by Martin Posselius (1609, 1612), Jan Dillingen (1624), and Jan van Weert (1632-37). In 1562 Giles Brebos was commissioned to build an organ in the style of the one in the Antwerp cathedral. For the new church in 1772, Guillaume Robustelly built a monumental organ (4 man/ped) that was sold to the church of Helmond in the aftermath of the French Revolution, where it still remains today. There was also a small organ present which Jan van Weert repaired. In 1662 Jan Dekens built a small 1-manual organ, restored in 1708 by Christian Penceler. After the reawakening of monastic life in 1834, Arnold Graindorge, who had been involved with the transportation of the Robustelly organ to Helmond, was commissioned to supply a small auxiliary organ. The iconography of the time (Génisson) presents us with some mysteries; it is possible that the old case by Jan Dekens stands right before our very eyes.

The Tongerlo Abbey has an organ by Johannes Klais from 1933 (4 man/ped). This came after the 1929 fire which damaged a smaller Klais organ from 1902. In the 19th century the abbey possessed only a small organ by J.J. Delhaye (1843) which was later under the care of Merklin-Schütze (1856), Ruef (1864), and Drijvers. In 1533 Jan van Liere built a new organ modelled after that of Meerhout: an important step in the development of the Brabant organ. Hans Goltfuss updated this organ in 1642 after a period of neglect. There was restoration work by Christian Penceler (1708-26) but this organ was lost in the French Revolution, along with the small organ. In 1543 Hendrik Niehoff built a small organ for the rode screen, adapted in 1616 by Jan Van Weert.

The Postel Abbey is the only one of the three to still contain the old organ case from the beginning of the 18th century. Sources give us no concrete information as to the organ's history. In 1871 Leonard Drijvers built a romantic instrument using the old case. This was replaced in 1973 by a Neo-Baroque organ (Pels, Hasselt, 3 man/ped).

Of St. Michael's Abbey in Antwerp, the head abbey of Averbode and Tongerlo, we know only that significant musical activity there flourished, but concrete details, including a name of an organ builder, have yet to be established.